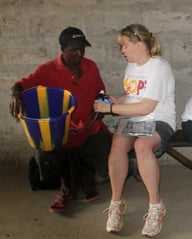 In the small West African country with a population of 4 million, more than 65,000 Liberians die each year from malaria alone. Many more die from dysentery, cholera, typhoid and infectious hepatitis due to compromised water. To help meet the need, the trio joined with the non-profit organization HOPE2 to bring water filtration systems to the country.

Over time, HOPE2’s mission has grown beyond just supplying safe water. In 2011, HOPE2 was officially recognized as a not-for-profit entity. Land was purchased in Marshall, Liberia in early 2011, which is today the site of the Hope Center, a multipurpose facility used to house teams, provide residency for Liberian team members and host group events for training and teaching. HOPE2’s vision is to foster a renewed sense of hope in the Liberian people and now includes providing access to education and healthcare.

Doug, Randy and Karla have worked through HOPE2 to help expand educational opportunities with the Hope Academy, which opened in October 2014. Hope Academy provides free education to over 300 students in grades pre-K through 4th grade living in the villages surrounding the Hope Center.

“An entire generation of Liberian children had no access to school,” said Randy. “The education that the Hope Academy provides is making a dramatic difference to these children and their futures.”

The war also destroyed the country’s healthcare system, and most of the rural population had little to no access to modern healthcare. HOPE2 stepped in with medical clinics and basic first aid training.

“Every February, HOPE2 offers a medical clinic at the Hope Center,” Karla added. “Each year, medical professionals from the United States volunteer to deliver medical services to the Hope Center and the surrounding communities.”

HOPE2 opened a new medical clinic in February 2018 to serve the school children and the villages in the area to provide basic healthcare needs and teach first aid, sanitation and personal care. Doug, Karla and Randy have traveled to Liberia many times over the past ten years and brought their families with them to help in the work that HOPE2 is doing. In addition to working in country, HOPE2 hosts various fundraisers in the U.S. including banquets across the country and an annual golf outing, of which Meduit supports through various sponsorships.

“It’s exciting to see the entire company getting involved,” Doug said. “Never underestimate what can happen when a small group of people start to reach out and help those in need.”