Insurance Outsourcing: A Race Against Time

Due to staffing shortfalls, budget constraints or simply an influx of volume, many providers are leaving some portion of unresolved insurance accounts untouched. If left unworked, those accounts will age out, become less collectable over time and eventually be written off to bad debt.

The collectability of A/R decreases with age as seen in the chart below: 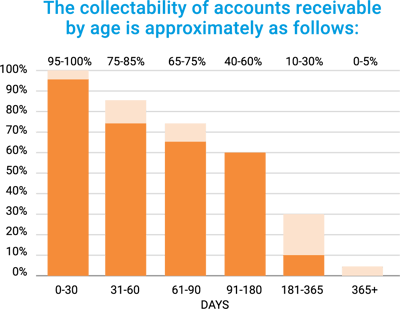 Recently, Meduit worked with a midsized regional hospital that was under-resourced in their business office due to lack of qualified A/R resolution employees available in their local marketplace. A segmentation of their A/R revealed that once accounts reached 120+ days, the hospital staff was only working 2% of the accounts each month and collecting 15%, which equated to nearly $300,000 per month in collections.

Because the hospital had a chronic problem of unworked A/R on accounts older than 120 days, without a strategy to reverse this trend, the hospital eventually would have been forced to write off the bulk of the inventory to either a contractual or bad debt.

In the first 30 days, Meduit worked the 120+ accounts and increased collections by five times or nearly $1.5 million per month, with similar result trends projected for the following 60 to 90-day time period post go-live. While it did cost the hospital money to outsource the A/R, the total return was greater than $1 million per month when compared to prior levels of cash/revenue generation on A/R older than 120 days.

You can download the full white paper here to learn more about how Meduit helps resolve aged A/R before it is written off to bad debt.